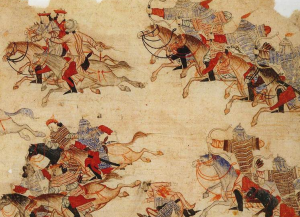 Savage: A person who is perceived as primitive, uncivilized, and brutal. A savage is an animalistic force of nature; fierce, violent, and uncontrolled.

Disciplined: Controlled. Following a code of behavior. Trained to do something in a habitual way.

Savages have changed the course of civilization. The Mongols ravaged most of Asia, Russia, and Europe. The Vikings, and their descendants, the Normans, pillaged continental Europe and the British Isles for centuries. They were classified as savages due to their martial brutality, but they were, in fact, a disciplined fighting force. They were undeniably effective, and their beleaguered neighbors were forced to grow strong or submit to their influence.

Any foreign invader is often classified as “savage” by their prey; largely because they are more aggressive than their targeted enemy, and they can attack without provocation. The Roman Empire would have been seen as savages by their rivals in the Middle East and Europe. The Greeks doubtless saw the Persians as savages. The British Empire during the Victorian Era was considered savage by their colonial subjects. The Nazis were savages. The Americans in Vietnam and the Middle East have been called savage.

Savage is a label we give to an aggressor we don’t understand and we can’t easily overcome. They don’t play by our rules. They don’t obey the laws and conventions of our civilization. So we label them thusly in an attempt to marginalize their behavior, while acknowledging their aggression.

The fact is, every great empire in history appeared as a savage to the peoples it conquered. But it wasn’t just their aggression that made them effective.

Aggression alone isn’t enough. It has to have purpose. Meaning. It has to be practiced with precision and expertise. It has to be a habit you cultivate. And you have to break the rules and ignore convention.

The Vikings were hostile, and brutal, but they were also the finest, most expert seamen of their age. All of northern Europe had to get stronger to withstand them. In many cases, they simply did so by assimilation with their Scandinavian aggressors – every Englishman, Scotsman, and Irishman today likely has a Nordic ancestor.

During the Victorian Era, the sun never set on the British Empire. Even the American colonists saw the Redcoats as hostile and uncaring oppressors. But there was no doubting their might and their discipline – and the Americans had to become even more savage to win their independence. George Washington was a brilliant strategist not for his ability to meet the British head-to-head, but for how he organized an untrained militia and employed guerilla warfare to harass a superior opponent and win a war by attrition.

Today, the United States military is the most potent martial force in history, but if you spend just a few moments with its most elite warriors, you will have no doubt: you are in the presence of a savage.

A disciplined savage. A man who has studied warfare and made an art of becoming the world’s most effective soldier. A man who knows history, who pursues peak fitness, and who is constantly aware of his surroundings, constantly looking for threats, and opportunities.

Disciplined savagery is largely a cultural phenomenon, but it can be found in individuals throughout history, and in our society today. We will continue to profile them here, and examine what makes them successful, looking for the common elements that comprise the formula it takes to change the world.