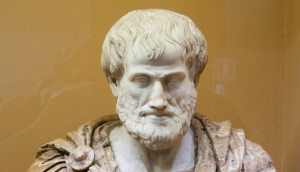 “What more accurate standard or measure of good things do we have than the Sage?”
- Aristotle

We love what we do not possess.

That is the conclusion proven by Socrates in Plato’s “Symposium.”  Poor men love money more than rich men. Rich men love the things money cannot necessarily buy.  Men love the feminine beauty of women.  Women love the masculine strength of men.  The young love the confidence and respect that their elders bear, and the old love the energy and potential of youth.

In many cases, that which we love the most is utterly unattainable.  And yet, we seek it.  Man will never be immortal, but we seek paths to immortality in nearly everything we do.  We embrace spirituality.  We bear children to carry on our bloodline.  We create works of art and industry that we hope will last for generations.  We perform acts of heroism and valor that might be recorded in the history books.

That is the nature of love.  The passion that drives us to pursue something rare, elusive, and perhaps even impossible.  It is a selfish urge that can make us do selfless things.  A mother would give her life for her child out of love, knowing that her legacy would carry on.  She becomes immortal through sacrifice.  The same applies to the soldier who dies for his country, or the missionary who is martyred for his faith.

We will spend our lives to make them part of something greater than ourselves.  That is the road to distinction.  It is a reward that we will never see within the confines of our mortal existence.

And we pursue it nonetheless.

The love of wisdom is discussed ad nauseam in "Symposium." In that dialogue, it is concluded that when you have attained wisdom, you no longer have any reason to love it.

In most ancient schools of philosophy, those who have attained complete wisdom in a given subject were called Sages.  The Sage was considered the virtuous ideal for that school of thought.  In many cases, gods and Sages were equal; if you reached the point of total enlightenment, and had no further wisdom or mastery to seek, you were a Sage in that subject, and could arguably be considered on equal footing with whatever patron god represented it.

It was an unreachable standard.

On one end of the spectrum of learning were the fools, who had no realization of their lack of understanding.  On the other end were the Sages, who were fully enlightened and had nothing left to pursue.  In between were the philosophers, who were aware enough to seek the wisdom of the Sage.

This is where Plato’s point about love and passion comes back into play.

We love what we do not possess.  In this case, we can never attain the full wisdom of the Sage.

We pursue it regardless.  Passionately.

We live in an era of polymaths.  Any fool with a smartphone can peruse the wisdom of giants in any number of subjects.  You can become a student of a dozen disciplines.  There is no barrier to becoming a Renaissance Man in this digital age.

Pick a field.  Pick a dozen.

Then pursue mastery toward the most virtuous ideal possible.  Envision the Sage; the epitome of what is valorous and good in your chosen brand of autodidacticism, and follow the path that will change you into that being.

There are a great many callings present in your life, if you have ears to hear them.  Embrace the mindset that you are a divine creation, fully capable of carving out that eternal destiny.

You’ll die along the way, and enjoy immortality as your reward.